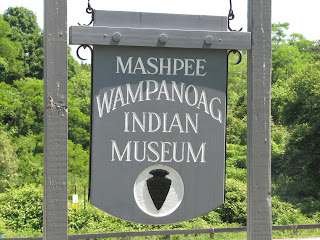 The museum is located at 414 Main Street (Rt. 130), Mashpee. The house containing the museum was built around 1793. It was originally the home of Sherjashub Bourne, the great-grandson of the famous Richard Bourne.
I had stumbled across several Richard Bourne related legends when I attempted to trace the history of Chamber Rock in Bourndale. Richard Bourne was one of the first Christian missionaries to preach to the Cape Cod Natives. He also purchased huge areas of land on and set the land aside for the tribe he called the South Sea Indians. This land eventually became part of the Town of .

The current curator of the museum is named Putnam Peters, himself a member of the Wampanoag tribe. As he led our small tour group through the building’s displays, he was patient enough to answer my many specific questions.
﻿ ﻿Putnam explained the current members of the Wampanoag tribe still revere Richard Bourne. In fact, the tribe celebrates a Richard Bourne Day every year. Putnam was also able to answer a lingering question I had about the story of Chamber Rock, in which the Wampanoag had been performing human sacrifice. Putnam stated that he had never heard any history to support such a practice.

Putnam and his wife Jeanne were also happy to discuss Metacom, Massasoit, and the King Philip’s War. They also showed me a wall in the museum which displayed the current leadership among the Wampanoag Tribe. I would have to say that both Putnam and Jeanne were very knowledgeable about their subject.
﻿ ﻿If you are interested in visiting the , it is open every Monday and Thursday from 10am to 2pm. There is no entrance fee, but there is a place to make a donation to the museum. As the building is currently under renovation, I’m sure a donation would be appreciated.

Museums like this are really important. Not only do they display one of a kind artifacts, but they help maintain and educate people about local history which is not something that is taught in every classroom. Putnam and Jeanne explained that they often have very young children visit the museum during the school year, which is a great educational opportunity for them.
﻿ ﻿ However, the history of the Wampanoag people, the King Philip’s War, and the development of is a huge and mature subject for such young children to learn about. Museums like this bring this history to a larger audience, who might become curious about something they learned. Maybe they’ll embrace their curiosity and delve into some research. And as I’ve learned, one answered question only leads to more. Embrace that, and sometimes the learning and curiosity goes well beyond the museum door.

Mashpee on Dwellable
Posted by Wicked Yankee at 10:16 AM